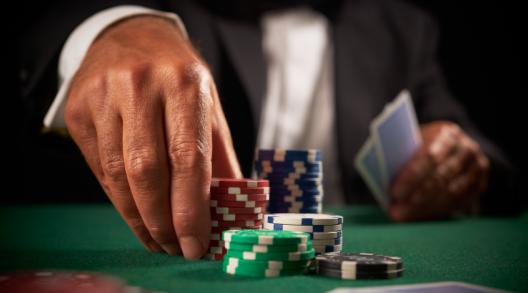 Here are my secrets to making great decisions every time, without a crystal ball.

There is no way to predict the future. No matter how much information you have, it’s almost inconceivable that you could predict the outcome of anything more than the simplest of actions.

The truth is, your ability to predict a result is a function of :


It is absolutely possible to make a living, with almost no risk, playing Poker or playing the Stock Market. That’s right : pretty much risk-free!

Before you tell your boss to “shove it”, or kick all your customers out the door, you need to understand that both of these ventures require three key ingredients :

Just because you win a hand, doesn’t mean you made the right decisions along the way. If you went all-in from a poor position, and got lucky on the last card, then your win was either the result of a skillful bluff, or pure luck. You cannot rely on luck to see you through every time, so if you want to make a living out of it, you’re going to need a different strategy.

To be “up” at the end of every year playing Poker, you need to play the odds. Playing less experienced opponents, your mastery of the statistics will relentlessly wear them down. If you’ve calculated you have a 20% chance of winning, and you need to add 18% of the total pot to have this chance, then the odds are in your favour. If there’s £100 in the pot and you need to add £40 to stay in, it’s probably time to fold.

As you gain experience of playing Poker you learn how to not only play your hand, but also how to play your opponent. What are his patterns? What frightens him enough to fold, and what causes him to go crazy and start throwing money in? Does he get fidgety when he’s bluffing?

You can only get good at this by having experienced this many times over and over again, and learnt that on average a certain strategy works. But then it becomes critical to be able to dispassionately judge the outcome. Did you win because of good decisions, or luck? Was this loss the exception, or the rule? Gradually, a masterful player builds up a sixth sense, and intuition which allows them to make decisions based on hundreds of signals they’re no longer even consciously aware of.

The biggest problem comes when you’re on a losing streak. You could be playing everything 100% according to the solid, tried and tested rules you’ve developed. Rules you know to work overall. Yet for the last month, you haven’t won a game, and you’ve burned through half of your cash. It’s easy to start throwing the rule book out the window in a desperate attempt to recover losses and turn things around.

But that’s the last thing you should do. As in business, you have to be able to sustain continued periods of losses. The reason you need such a large initial stake, is that everything is relative. If you take bigger risks, you earn more money, but also lose more money. The more money you’d like to make over a period of year, the bigger risks you need to take, which means the bigger stake you need to sustain the bad times. There is no way to win every hand, and you have to be prepared and strong enough to deal with that.

In terms of the stock market. When I grew up, I pictured one day running around a trading floor in a sharp suit shouting across the crowd buying and selling stocks and shares. It looked so exciting, and filled with incredibly clever people who just had an amazing ability to work out what was going to go up and what was going to go down.

Well, the stock market is an outrageously dynamic, constantly shifting sea of influences and values. Looking at the numbers from the outside, it all looks almost random. Yet, when you look at a historic chart of the stock market, or indeed most individual share price charts, it is surprisingly possible to see the same pattern repeating.

If you look at the chart over a day, a month, a year, or ten years, the same pattern appears on a relative scale. This means that, on average, it is entirely possible to predict whether a stock price is going to go up or down.

If you want to do this, then you need to know about Support and Resistance. A stock price chart (or indeed the chart of the entire stock market) tends to fluctuate between two price levels (sometimes these are at the same level, but that’s for another time!). The Support, is the lowest price level the stock is fluctuating between, and the Resistance is the highest.

The stock will tend to “bounce” between these levels, rather than continue past them.

Why? Well no matter what anyone tells you, there’s no way to give a complete answer to this, but it revolves around the fact that under normal circumstances the stock market is affected solely by human beings, and human beings are imperfect. A price of a stock isn’t set by the wealth, prospects, balance sheet and P&L of the company. In other words, the price of a stock is only partially related to it’s actual underlying value. The price of a stock is, however, entirely dictated by the price someone is willing to pay for that stock. This means that individual human beings are setting the prices, thousands of times a minute - often without being particularly aware of it - simply by buying and selling.

So, back to the Support and Resistance. If you bought a stock at 100p, and a year later it’s worth 180p. Happy days! You've already put a down-payment on a new swimming pool, and booked that trip to Bora Bora. You’re being advised to sell, but it still seems to keep going up. “Maybe I’ll give it one more month”. Then next week it drops to 176p. “That’s ok.. just a small drop, it’ll come back.”

It starts dropping like a stone. In three weeks, it’s down to 150p. You’re so annoyed with yourself. But then it starts to climb again. 155p, 160p, 165p.. at what point do you sell? You promise yourself “if it gets to 180p again, I’ll sell immediately”. But then it starts dropping again, and before you know it, it’s back to 150p. “Damn it!”. You look at the prices every day, and decide that if it gets above 160p again, you’ll sell.

To your delight, it starts going up again, and as it hits 165p, you sell. You’ve taken a good profit, so you’re happy, but you still kick yourself for not taking 180p.

In this simplistic scenario, you - along with thousands of other people - are contributing to the Support and the Resistance.

As the price dropped down towards 150p, you - and pretty much everyone else who holds the stock - are thinking “I should have sold! damn!”. People who didn’t buy the stock at its original low price are looking at it carefully and once it gets to a sensible price, they're going to buy - which they do, at 150p. This influx of buyers pushes the price back up again as demand increases.

People who held the stock at the all time high of 180p (like you), see the price get to 165p and think “that’ll do, I’m getting out” and sell. Maybe they bought at 160p, and promissed they’d get out as soon as it was in profit. All these sellers force the price back down.

The people who missed out the last time the price was 150p (waiting for it to get to 140p) promise themselves “if it ever gets to 150p again, I’ll buy”. And so the loop continues. 165p being the Resistance, and 150p being the Support. The price will bounce between these two levels.

But not forever. Eventually, the price will break through either the Support or the Resistance, and once broken through, it tends to carry on to an entirely new level.

So if you can recognise the pattern, buy at Support and sell at Resistance, then as long as there is sufficient disparity between the two, on average you will make money. A more advanced strategy is to look for the break-through, by deciding how much the price must increase above the Resistance, or reduce below the Support in order to show that it's broken through, and then either buy or sell accordingly.

Sounds easy, right? Well actually it kind of is! The biggest problem is overcoming human emotion. To run this kind of strategy you need to be absolutely diligent to stick to the plan, even when you’ve taken a pounding for the last six months. You also have to take care to respect your stake. Black-Mondays do happen. And when they happen, you'd better hope you’ve correctly calculated your stake money, in relation to your earnings. Worst of all it requires dispassionate, robot-like methodology. It’s not really a lot of fun, and ultimately this is what put me off playing the stock market.

There are too many possible permutations to calculate consistently in both Poker and the Stock Market to predict an accurate outcome. Sure, there will be times when you know it is mathematically impossible for anyone to have a better hand than you. Sure, there will be times when you just happen to be first to react to a news story and buy or sell the right stock at the right time. But these are the exceptions, not the rules.

Business isn’t as simple as Poker or the Stock Market, because - aside from laws - there are really no rules. Even if everyone played fair, the complexity of the various scenarios is so vast that we have to rely much more heavily on gut instinct, and judgement.

Gut instinct is only powerful when it has been honed through similar experiences where the outcome has been carefully considered. If you let the wrong information in, then you’re effectively training your gut to provide the wrong instincts.

The quality of a decision should not be measured by the outcome of that decision. This is quite counter intuitive. But the fact is, you couldn’t predict with absolute certainty what the outcome was going to be, so you made your decision based on what you did know, not what you didn’t.

Doing the same thing repeatedly and expecting a different result is going to lead to unending failure and frustration. If something doesn’t work, try something different next time. The more times you do something, the more you learn about what works and what doesn’t.

It requires a lot of humility. You have to accept you don’t have all the answers. People who spend their day trying to convince everyone they have all the answers, and avoid taking risks incase they fail and prove they don't, rob themselves of the ability to learn and improve.

Entrepreneurs fail and learn from their mistakes, then try again. They don’t get it right all the time. They almost never get it right first time. But to be very successful you need to be able to carefully judge whether something worked or didn’t, and then adapt your approach based on those results, and then get up and try again.

Being successful in business is about being bad at business to start with, but being willing to try anyway. Making mistakes and learning why things went wrong; by failing in many different ways, over and over again, but getting up again, dusting yourself off and trying again in a different way with even more verve and energy than the last time, is what makes people great.