Can Monkeys Teach us About How Business is Done? 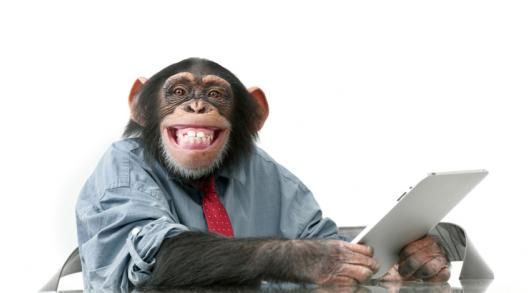 How many times have you heard the phrase "well that's just how we do it round here"? It's the grown up equivalant of "because it just is!". One of those catch-all responses which are very difficult to argue with.

Let me tell you a story that just might help you win that argument.

In 1967 some clever (and it seems possibly slightly sadistic) social scientists set about to create an experiment with the catchy name "Cultural acquisistion of a specific learned response among rhesus monkeys."

Step 1: They borrowed ten rhesus monkeys from somewhere - hey it was the sixties!?

Step 2: They assembled a big cage and put some steps in the middle leading up to the high ceiling where there hung a bunch of delicious bananas.

Step 3: Five of the monkeys were put into the cage, while five remained in another room.

After a few minutes, a monkey noticed the bananas, and made a dash for the stairs. Just as the monkey touched the first step, the scientists sprayed all five monkeys with ice cold water.

Lots of irritated noises and a bit of sulking later, everything calmed down until another monkey spotted the bananas, and must have thought "How the hell hasn't anyone seen them? They'll do nicely!". But as soon as he touched the first step, again the scientists sprayed all the monkeys with ice cold water.

Eventually everyone knew "don't go near the steps, or we all get wet and cold - and that's bad".

After a while, they removed one monkey and sent him off to be blow dried, replacing him with one dry monkey. So now there were four wet monkeys and one dry monkey in the cage.

Eventually, the new monkey looked upwards, and because he hadn't seen the horrors of the past 30 minutes, he made a dash for the bananas. Totally "over" the whole "ice cold water" thing, the four wet monkeys - much to the dry monkey's surprise, attacked him, not letting him go anywhere near the steps. The trigger happy scientists were denied their sadistic fun.

Sooner or later the dry monkey realised that whenever he went for the steps, the others just beat him up, so he stopped doing it.

Now here's where it starts to get interesting.

They then replaced another wet monkey with a dry one. Now there are two dry and three wet monkeys.

When the newest monkey eventually made a dash for the bananas, the other monkeys INCLUDING the previous dry monkey, all attacked the new monkey.

This pattern continued until eventually there were no wet monkeys left, and even though none of the monkeys in the cage had ever been sprayed with water, they all still attacked any monkey who went for the steps - with no concept of the underlying reason. "It's just how things are done around here".

You can't challenge everything all the time as you'd get nothing done at all. Learned responses are actually also a mechanism that helps society and companies develop in positive ways. "Best practices" help you and your people get things done efficiently without having to reinvent the wheel every day.

But it's also really healthy - every now and then - to really question why things are done a certain way - the world may have changed, or just the underlying reasons for the practice no longer applies.

In other words, stop monkeying around.